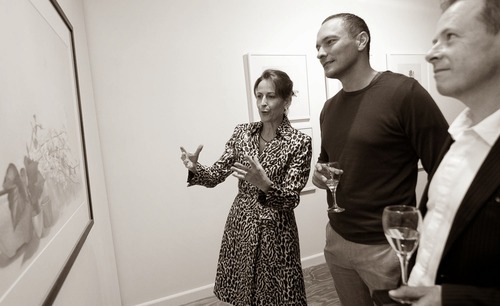 Last week, ABC’s own Virginia Haussegger opened the fantastic exhibition, Beneath the Surface, currently showing at M16 Artspace. She gave a delightful insight into the three artists, Tiffanie Brown, Peter Ranyard and Peter Rohen that are also her close friends. Throughout her speech, she also touched on some of arts ‘big issues’ like, “what is art?” If you missed the opening, would like to relive it, or simply know the answer to thatbig question, we have her opening speech below:

“Good Evening. What a tremendous honour it is to launch an exhibition such as this.And what a challenge it has been, as this invitation has forced me to think long and hard about the nature of art and observation. Which beckons the opening question – What have these three artists done … and why should we care?

This exhibition – Beneath the Surface – is perfectly titled… as that is where they are taking us. We all see things differently – often it depends on who we are, the context of our experience, and perhaps – simply, how we are feeling at the time. Sometimes what we see can be in stark contrast to the reality.

For example, I have a beautiful photograph from Peter’s last exhibition. Recently the frame was damaged. I pointed it out to Peter the other night at our house and later he sent me an email explaining how I could get the “feather image” reframed.

I went and looked at the photograph again: standing still and squinting at its central image. I suppose you could call it a “feather image”… perhaps it is a feather, lying on delicate ripples of sand. Until that moment I’d been calling it “lips of the labia”… as I thought it was a sort of feathered representation of female genitalia.

Whereas another friend of mine said it should be called, “debris on the beach”…as it looked like a little bit of flotsam washed up on the shore! We all see, interpret and understand the images around us – differently.

As journalists – trained observers – we race in, we see – sometimes what weneed to see; sometimes what we ‘think’ we see; and sometimes we see too much. Then we bolt off, fling ourselves at our laptops and with one eye on the clock, we furiously try to shape sense and meaning out of our observations.

Tiff, Peter and Pete put such fleeting antics to shame really.  As they are not only masters of their medium –  but masters of observation. All three are master craftsmen – highly skilled and classically trained in their chosen art.

But they also are gifted observers – with, what I believe is a higher power of observation than most. Which is what makes their art so remarkable.

These artists have a fascination with the ‘object.’ Natural objects and constructed objects: how objects are transformed by the environment, by light, by history and … even by neglect. Each of these artists has a distinguished talent for elevating commonplace objects – to a thing of beauty. They have a talent for making us stop, be still, and look – really look – at the composition, texture, the light, the shape, the formation of the things around us

For Tiff – that may be the simple elegance of pods, twigs, branches, glass vessels… corks – that popped open a night of beautiful pleasure and memory. With a deep understanding of the mathematics of beauty, Tiff looks for patterns in nature’s designs. Her tools aren’t just her eyes, but her senses; her intuition; her spirit. It takes a considerable level of meditative focus to unlock the patterns she sees. And then to par back the complexity of design to its essence – its essential form. Her elegant and delicate works are like a soft breath on paper.

This is what Tiff has written about her work in this exhibition, “This series of paintings attempts to capture the essence of the objects portrayed, in their perfect, pared-back simplicity by focusing on and examining details of construction and by doing so, elevating even the most commonplace and pedestrian object to a thing of beauty. The works are all watercolour on paper-as fragile as the objects themselves.”

For Peter Rohen – a major focus in his work for this exhibition – is the exquisite beauty and historical importance of the Montaray Pines at Mt Elisa: the pine leaves, their shape and form, and the nests found nestled in these magnificent trees.

But for Peter they’re not just trees. Rather he sees a hub of life and activity that has been at play for generations of birds. As Peter says – one of these trees is like a city apartment block for birds. There is a family of owls living in one that have been there for 3 decades. Yet the developers who are currently knocking them down – don’t see the life, the forms, the beauty and elegance in design, or the fact that these are homes. All they see is rubbish in need of clearing.

Here is what Peter has to say about his collection in “Beneath the Surface,” “I wanted to simply concentrate on things too often overlooked and dismissed by our increasingly self-referential and insular culture.

We live in built environments, governed by technology. We visit nature in theme parks. The flora and fauna remaining around our daily lives have been reduced in our minds to decoration, architecture or pests.”

And for Peter Ranyard – the Formalist among us – he urges us to let our eyes wash over a scene, an object, a shadow and experience its texture, its inherent nature, its shape… and its story. In his play with light – exquisite light – his found objects, or captured moments in landscape, merge out from the dark.

Just as a shadow falls, or a shard of light strikes a surface – Peter’s fascination with the transformation of an image and the power of its narrative comes alive.

And he gives equal devotion to an object – whether it be a tiny knob on the door of the Pantheon… or a massive heavy marble statue – left dumped outside a grand Berlin house. Where the German occupants only saw an old piece of artwork damaged by soviet bullets – Peter saw a story, a history and, perhaps most importantly … the intrinsic beauty of imperfection.

In Peter’s words, “I have always been drawn to the constructed object, particularly those abandoned.The fragile nature of made objects is a constant reminder of our impermanence and that sometimes their beauty is a result of neglect and the patina that is acquired through the process of ageing. The images require long periods of searching and waiting to find the right combination of light and form.”

All three of these artists celebrate the ethereal nature of objects – be they natural or constructed.  And in this exhibition they are taking us Beneath the Surface of the found object. Their fascination with the physical form and what defines it – the reflections, shadows, pattern, colour – the narrative, the history – is a rich study in the meaning of objects.… And ultimately a study in the inherent meaning of our material world. They all have a remarkable talent for elevating commonplace objects to things of exquisite beauty. Breathtakingly so.

So… returning now to where I began: What have these three artists done and why should we care? The response perhaps lies somewhere in the answer to that age old riddle – ‘what is art?’

Oscar Wilde insisted ‘Art is not a thing. It is a way’.

And so it is with Tiff, Peter and Pete. Their art, and the thousands of hours they spend poured over their craft is indeed not a ‘thing’. It is their ‘way’. It is their life. And their purpose is expression. The result of their expression is – a gift to us all. We are urged to open our senses – in order to perceive it. And receive it.

Tolstoy answered the riddle to “What is Art” in his famous 1897 essay by defining art in terms of good, truth and beauty.

But I suspect “Beneath the Surface” is pushing even these boundaries by taking us a step further.

The Italian painter and ‘object, action artist’ Michelangelo Pistoletto suggested, “We have our Arts so we won’t die of Truth.”

And god only knows that here in Canberra, – the nation’s political  capital – we are  in daily danger of dying from the  horrible ugliness of truth.  (Which is perhaps why we work so hard at spinning it into  ‘half-truths’ and ‘untrouths’!)

Maybe the Greek philosopher Aristophanes should have the last word in this riddle.

He said, “Art suffers the moment other people start paying for it.”

(Yes, well, we only need look at the modern day Greek economy to know  not to take payment advice from the  Greeks!)

The real truth is, not just Artists , but we all – as a society – start suffering when we don’t value art … and pay for it.

So get purchasing and embrace “Beneath the Surface.”