Little Christian sentiment from a preacher of God’s justice

This isn't the first time Queensland MP James Bidgood has shocked his colleagues but, if nothing else, he's getting very good at it.
Read more

There are so many negatives weighing down the choice to have a child, it's astounding anyone still does it. Financially it's the most irresponsible thing a woman can do.
Read more 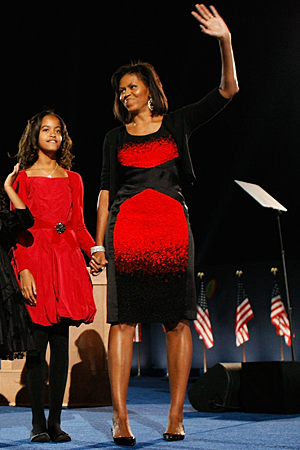 Greer sneers in frock horror as our image watchdogs howl

You know the fashionistas of the world have won the war when Germaine Greer steps in. Not to fight 'em on the front line, or smack 'em in the giblets as some would like to do to Greer right now, but to join them.
Read more

Twelve little Afghani girls have been staring down at me for the past four years. Staring with suspicion? Inquisitiveness? It's hard to tell.
Read more

Americans are a weird mob. The world champions of the cult of individualism have become united.
Read more

During the ABC's recent television broadcast on ACT election night I got a small thrill. As the cameras rolled, it struck me that - for the first time - our election reportage, live- crosses and hosting were being conducted by an all-woman team.
Read more

Wham, glam, thank you, man – and for so little money

So, Sarah Palin’s election campaign wardrobe has cost more than $US3,000 dollars a day; every day; for the past seven weeks. Big deal.
Read more

Mercifully, it's over. Those appalling election ads have stopped. That dumb noise, nagging through every television break, has finally been switched off. Now, at last, we can all head out to vote. Pity though that voters' heads are giddy with idiotic, jingoistic, rhyming ditties.
Read more

Doubt this bloody ad campaign will pull any more tourists

There's nothing quite like a depressed American woman in tears, a stressed-out Chinaman, and a beautiful Aboriginal boy, to get us all wondering "what the bloody hell is this?"
Read more

Choosing a career can be tough. For the ambitious American bombshell, Alison Waite, it was real tough, as she explained to the Australian media earlier this week. She'd just finished graduate school when her first nude centerfold was published in Playboy. "I thought, well, what do I do? Medicine or the Mansion?" She chose the Mansion.
Read more 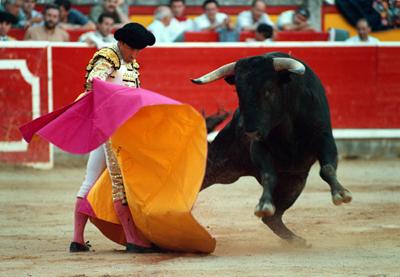 A Glorious Kill and a Grubby Demise

The essay, "A Glorious Kill & a Grubby Demise", was published in "ANIMALS", by Finlay Lloyd Publishers, October 2008. The illustration is by Ingeborg Hansen
Read more

Generosity of spirit endures long after duration is reached

It's often the unexpected kindness of strangers that lingers most in our memories. And the television industry isn't known for its kindness: strangeness, maybe, but not kindness.
Read more

Our leaders’ partners are more than merely manbags

It’s an odd thing. Even though Janette Howard clearly played a prominent role in the shape of Australia's political history, I can't remember what she sounds like. In fact, I can't recall ever hearing her speak. And yet her words were crucial in influencing the actions of her husband the nation's second longest serving prime minister.
Read more

Why is it that politics has such a problem with lipstick? Since when did this simple stick of colour, kept in a tube and carried in every woman's handbag, become the mask of dirty swine?
Read more

The use of women as a prime- prop-in-politics reached dizzying heights this week. And we're still all starry eyed, wondering where it's going to lead. If you happened to have been asleep for the past several decades and woke up yesterday, the world would look upside down. Suddenly women seem to be on top.
Read more

An encounter with the door bitches of Club Feminism

I didn’t really think it could be Mink, but it’s always best to ask. Flipping through a second-hand rack of coats, the old woman running the store beamed at me. “Oh, no dear. That’s not fake, it’s faux fur”. She pronounced it “fax”. And she seemed to think I’d struck gold. “It’s a lovely faux fur”.
Read more

If the hat fits: mayor’s mouth runs off with the misogynists

Mount Isa's Mayor, John Molony, has a big mouth. He may have trouble getting a coherent sentence out of it. And he may struggle to form a logical argument in his big head. But none of that bothered the marketing men at Akubra. They chose to name a hat after him. They called it ''The Honest John''.
Read more

To focus on the superficial will erode a powerful woman's authority. So I'll be quick about it. Here it is: Condoleezza Rice wears fabulous shoes. There. I've said it.
Read more

Do your children make you happy? Of course, we'd like to think they do. But the truth is, most of the time they probably don't.
Read more

In the city ''invaded by joy'' it seems God can be found just about everywhere. According to one 17-year-old pilgrim from Melbourne, God resides at Bondi Junction: ''God, the shops are good there,'' she told me, breathless with joy.
Read more

Dennis Ferguson looks every bit the monster he is. Balding on top, greasy hair strands down his neck, thick glasses and beady eyes. In fact more than beady, they're nasty eyes. His mouth is hard set and ready to snarl. One community website even has a photo of him with his tongue hanging out.
Read more

Female friendships can be fierce. And for all its fashion, frippery and product placements, the movie Sex and the City is a welcome celebration of just how deeply fierce and enduring those female bonds can be.
Read more

Alarm over polygamy as Muslim women suffer in silence

Consider this scene: a husband and wife in suburban Sydney step out on to the porch of their brown brick home, to pose for a news photographer. She chats away, trying to make them feel relaxed as she takes several snaps; even cracks a few jokes trying to get them to laugh. And why not? This is, after all, supposed to be a happy scene. A modern-day couple going public about their modern-day marriage.
Read more

Time to put some life back into Canberra’s public buildings

The fact that some well positioned people hate going to work has always been an abstract concept to me.
Read more

If the young woman’s intention was to shock and silence me, she succeeded. Only for a moment mind you. But it was a jaw-dropping moment. I had just delivered a speech at a Sydney weekend conference titled “Let’s Talk About Sex”, run by the Australian Reproductive Health Alliance. My theme was a call to arms against the increasingly overt use of sexism in media advertising and popular culture, particularly music videos.
Read more

A moral panic over sex gripped Australia this week. And like a wooden doll with a wobbly head our Charlie Brown PM was - as always - at the ready with something earnest to say.
Read more

Focusing on Facebook could mean not facing up to reality

Twenty-two year old Jamila Rizvi is ''deliberately barren''. So too are several hundred of her female university friends. Or they were, but fortunately not anymore. Which is just as well, as infertility is perhaps not the best kind of advertisement a healthy young woman wants to put out there.
Read more

Hillary’s campaign will end in tears, with no thanks to Bill

So who will weep the most him or her? My guess is Bill will cry and Hillary will just sniffle. Her eyes might mist up, like in New Hampshire. But it will be brief. Hillary isn't a crier. It's Bill who's the sook.
Read more

How many knobs does it take to distort a TV perception?

Sam Newman is probably right about grabbing a lingerie- clad plastic doll on the crutch. It's hard not to.
Read more

I would like to report a crime to the police. And I want them to lay charges.
Read more

A friend of mine has just been poached by an international firm to head up a global team in Britain. It's a super plum job that comes with a seven- figure salary and various globe- trotting perks in addition to excruciatingly long hours to account for various time zones. He hasn't decided if he'll take it yet, but with private school fees still ahead, as well as a thumping big mortgage, the lure of such a lucrative package is strong.
Read more

When the ordinary is extraordinary – and sadness is a virtue

There are myriad reasons why Asmi Wood might feel angst about his complex roots. The Arab-speaking Torres Strait Islander, who looks like Tom Cruise and is an Islamic convert (having fallen in love with a Muslim woman) - and who also happens to be a lecturer in Law at the ANU - found himself trying to explain his identity to a disbelieving customs official in the Middle East recently.
Read more 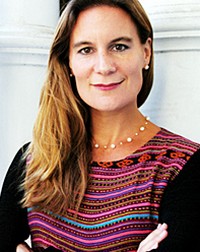 From suburban Melbourne to First Lady of a small nation, Kirsty Sword Gusmao plays her audiacious part with gentleness and calm.
Read more

Bimbo blast: this online ‘game’ is nasty and demeaning

There is something perverse about this scene: a 23-year- old French lad, Nicolas Jacquart, sits at the kitchen table in his rather dreary little London bedsit, with a CNN reporter at his side. The reporter, a grown-up lad in a suit, stares at the lap-top screen in front of them. ''So Nicolas, this is your bimbo?'' Jacquart croons, ''Yah. I can put on her this T-shirt, like this,'' he clicks the mouse, ''and make her look beautiful.'' Both lads smile.
Read more

Silda stands by her man in a betrayal of herself

It's a hell of a shame that women talk too much when we shouldn't and don't speak up when we should. And right now the stupefying silence of Silda Wall Spitzer is sending me crazy. I want to slap her.
Read more

Every year on International Women's Day, Linda Littlejohn and I have a bit of a sparring match. It began as a polite thing, when we didn't really know each other. We'd just skirt around the periphery. But of recent years, Littlejohn has got a bit ballsy. And maybe so have I. Either way, we both get a bit ''edgy'' at this time of year, and by the time the day comes around we're both rattled. Inevitably, there's a bit of a dust-up.
Read more

Oh, to be a fly on the wall the next time Lachlan Harris is face to face with his mother. He may well be important in the Kevin07 scheme of things, given he's the Big Man's senior media adviser. But to his mum right now, the charming Lachie is not the messiah. He's just a naughty boy.
Read more

Down Ralph! Nothing sexy in belittling high-profile women

In Australian public life it's easy to dismiss women. To belittle them with a verbal thump, and a sexist sound-bite that's as good as an elbow shove in the guts.
Read more

Blundering Nelson spoils the mood of a healing day

Brendan Nelson began in splendid spirit, and Lily Arthur was ready to hang on his every word. By the time he got to his feet in Parliament on Wednesday, many hearts had opened and softened. Those who previously felt no particular connection with Australia's indigenous people were now surprised by their own emotional response to this moment.
Read more

Why is it that gods of various denominations hand out dubious instructions to the most feeble-minded?
Read more